The bus ride to Luxor was short, beautiful, and peaceful. We watched the sun set over the Valley of the Kings while we drove.

Our first stop was the Avenue of the Sphinxes. I couldn’t believe I was there! I’ve always wanted to see the avenue. It was just as I pictured it. We posed for some pictures and then turned our attention to the main temple. One day I hope to come back and walk the avenue from Luxor to Karnak just like the ancient Egyptians did. 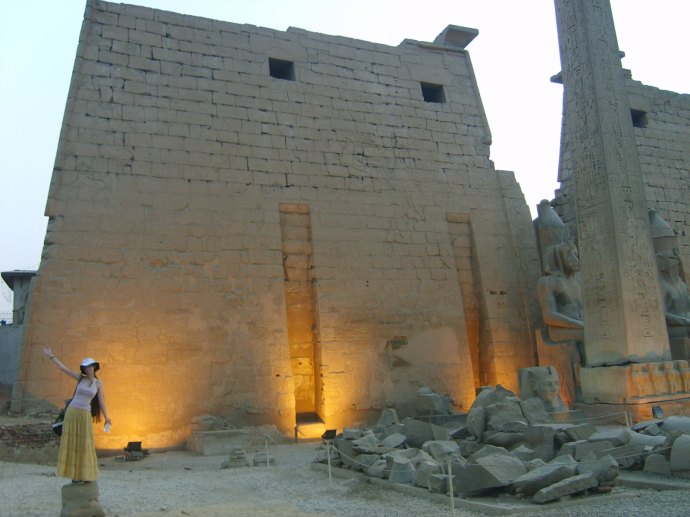 The two Ramesses II statues looked incredible all lit up. The obelisk was also amazing to look at. It must have been a wondrous sight to see the temple with both obelisks. Now the other one is in the Palace de la Concorde (click here to read the entry for when I saw that one). It was given to Paris by King Mohammad Ali in 1831. There were also baboons at the bottom of the obelisk. While we were taking pictures, tourists started climbing on the statues and going behind the ropes. This was upsetting Sherif. Lexi eventually yelled “oy get off!” They didn’t listen. Lexi made me laugh because she confirmed the stereotype that Australians say oy. The call to prayer sounded, which let us know that Ramadan was done for the day. We all offered Sherif food and water. However, the tourists were annoying him so much that he went to say something to them. Then he told the guards. The tourists were taking advantage of the fact that there very few guards and that they were eating.

The video below is of the call to prayer and Sherif telling the tourists to stop.

Next we entered the Court of Ramesses II. Sherif pointed out a door to us that was really high up, which showed us where street level was in the past. It was a door to the mosque called Abu Al Haggag. The court was filled with columns and standing statues of Ramesses II. There were two black granite statues of Ramesses II in sitting positions. Sonja took a picture of me with the one on the right. Next we walked through the colonnade, which consisted of 14 columns.

Then we stooped at the entrance to the court of Amenhotep III. It was beautiful! The columns really stood out against the dark sky. It looked Greek. Sherif asked us to sing opera and all of a sudden Paul busted out some fake opera song that surprised all of us.

Next we walked through the Hypostyle Hall. In the next area Sherif showed us Christian paintings because in the 6th century it was used as a church. There were also references to Alexander the Great.

As we head back Sherif tells me not to use flash on my camera because it will work better. I try one picture and it is awful. Sherif takes the camera from me and takes a picture that rocks. He keeps taking pictures, but they suck so I tease him about it. We take one final look at the temple and walk towards the bus. We pass the guards who are still eating and a gift shop. We get to the bus, but our driver isn’t there. He eventually comes running and apologizes. We climb aboard and I chug my water. It may be night time, but it is still hot. We were all hungry. Everyone was asking me if I was excited to finally open my suitcase. I was trying not to be excited because I didn’t know if I would open it and it would be empty. Sherif said I should wear my costume to dinner. In my head I agreed to do it if all my stuff was in the bag.

Luxor from the bus