I met Janelle and Lauren at Pace. It was already 104 out. I took the girls to see City Hall thorough the gates. We decided to walk across the Brooklyn Bridge. While we walked they looked at some of the vendors selling pictures. We took it slow and focused on how amazing the bridge and view are. We walked to the middle so they could see the plaques. Lauren bought a Times Sq. picture from the guy in the middle part of the bridge. We walked back and stopped in line with the 3rd floor windows at Pace. I texted my boss for her to go to the window and see if she could see us. She could. One of my students even waved. Not like we could see them. We were almost off the bridge when my cell phone rang. It was Lombardi’s confirming our reservation. Janelle stopped to buy a painting of a girl in Rome, Paris, London, and NYC. 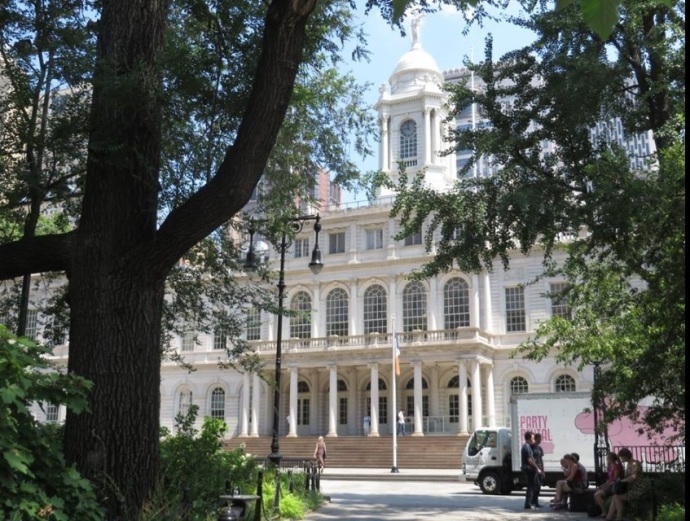 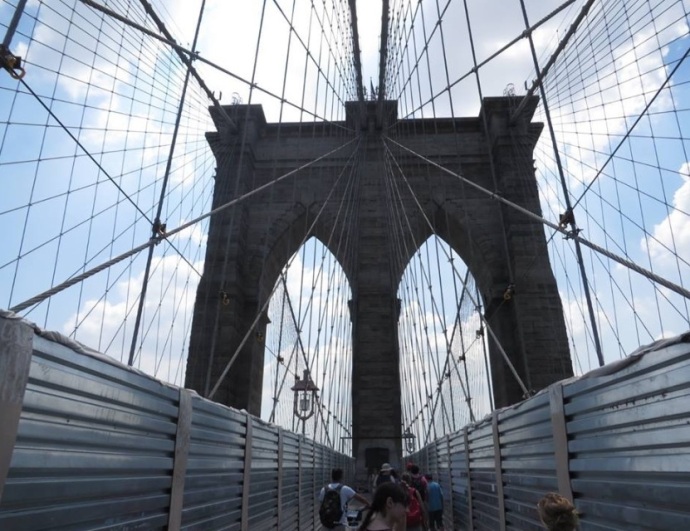 We walked back to Pace where we sat and cooled off. The AC and cold water seriously helped. We used the restroom and headed up Lafayette St to Canal St. I explained to them that Canal St was all about haggling, which is something Janelle is very good at. We walked up Canal on the right side. She bought lots of scarves for $5 a piece. She also bought bags for 1/3 of what the woman was originally charging. 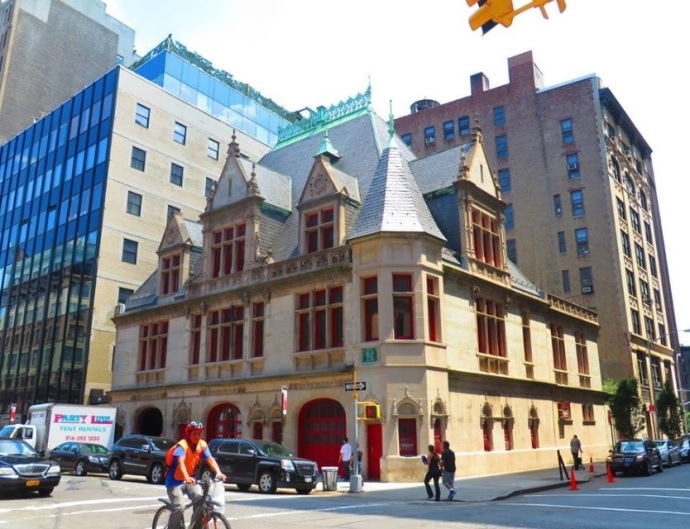 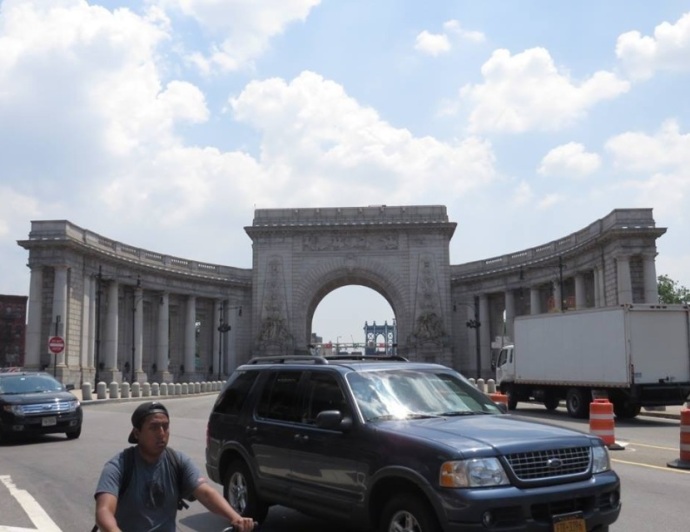 After that I took them into a Mahayana Buddhist temple. So they could see the giant Buddha. We walked to Prosperity Dumpling on Eldridge St. I was too hot to eat. They ordered boiled beef dumplings, boiled vegetable dumplings, and a sesame pancake with beef. I would have ordered the pancake if I wasn’t so hot. The smell of meat cooking always makes me sick but on top of being beyond super hot it was making me seriously want to puke. Since Prosperity is so small there was no where for us to eat plus I needed to escape the smell. We went across the street to Pace HS so I could drop stuff off and we could sit for a bit.

After they ate we headed back to Canal St to do the other side. We started walking and my shoes fell apart. The glue dried up. Thank you 104 weather. We went into a store where Janelle haggled for a while over PJ pants and a jumper aka jacket. She kept confusing the guy because be didn’t know what a jumper was. She wound up just getting pj pants. The next vendor had my shoes and said $5. I’ve never paid more than $2. The $2 had glitter or something special. I told her I pay $1. We argued for a while and I got her down to $3. I was desperate. We did several more vendors and I felt like I was going to pass out. I asked if we could go to Starbucks.

The Starbucks was crowded but we were lucky enough to find seats. Lauren got me a water. She had iced coffee and Janelle had some kind of refresher. We chatted for a bit about twins, prices in Australia, and Australian lingo.

We finished Canal st and I bought a pair of earrings for $8. They were originally $10. I probably could have gotten them for $6 but I wasn’t in the mood to haggle. We went to a store called Necessary Clothing on Canal. There was a pair of black shoes I liked for $9.99 but they didn’t have my size. I showed the girls what we consider a jumper. Janelle bought a dress. We left and Janelle wanted more of the black and white scarves. Luckily I remembered where the vendor was (the third one off of Lafayette). She bought more and we headed to Broadway.

We went to OMG! Where I saw a red and white shirt that would be perfect to be Saison Marguerite. It was only $9.99. The girls got some items as well. Next we headed to American Apparel. We walked out. We went to another Necessary Clothing. They had my shoes in my size! Janelle picked up a pair of boots for $5. I wanted this seafoam green dress but decided against it. The girls got several items. We took a picture of Janelle with all the bags and teased that she single handily ended America’s recession. 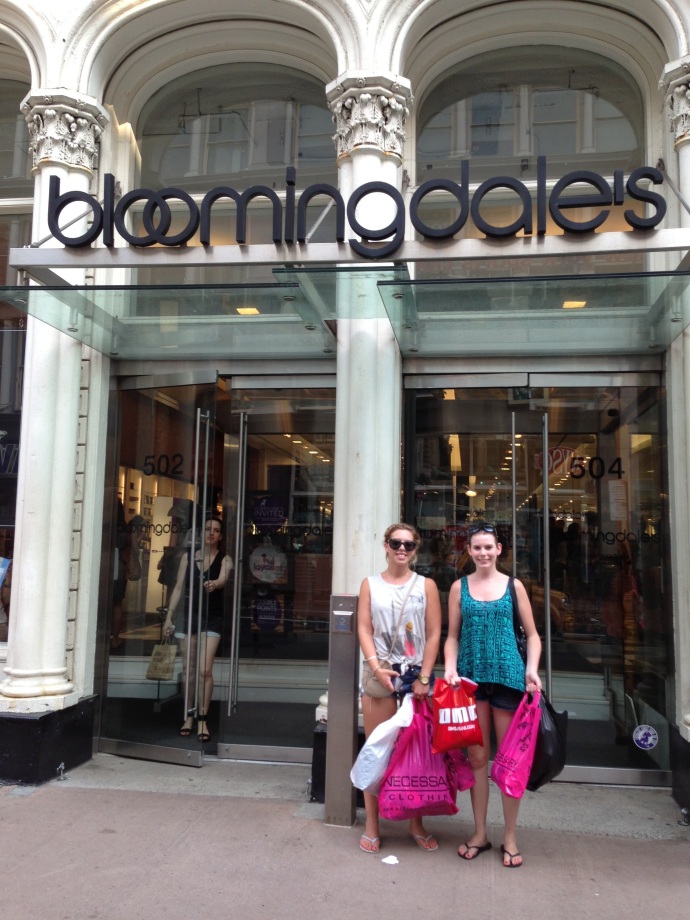 We walked to Spring St to head to Lombardi’s for dinner. We were going to meet up with a big group of my friends for dinner. Only one of them had been to Lombardi’s before. We ran into their friend Bronte first. Then we saw my friend Rochelle. We went into the restaurant and since our party wasn’t all there yet they told us we could wait indoors. Danielo arrived next. Followed by Flora and then Jason. Cesar was last because of train issues. They were finally ready to seat us. They walked us through the main dining room, then the side dining room, then the kitchen, then a hallway, and then up a set of stairs. They pulled a ghetto NYC move and put a square table and a round table together for us. At Lombardi’s you have to order pizza by the pie. We ordered 3 pies. One with no cheese, garlic spinach, and sausage. One that was half plain and half with sausage. One that was half anchovy and half pepperoni. They wanted to try anchovy pizza. The pizzas came and looked yummy. I took a plain slice. The Aussies stuck to the no cheese pizza. My friends each took an anchovy slice to try. They thought the anchovy one was salty, but not bad. Cesar didn’t like it. As we went to eat our pizza I looked to the left of me and the Aussies were eating it flat and to the right of me all my New Yorker friends were eating it folded. We taught them to eat it like us. The pizza was good. The bread had a char on it and the sauce was sweet. It wasn’t oily at all. I liked it. So did everyone else. Another party arrived and they knew Jason. Small world. Passcell arrived and joined us in chatting. We taught the Aussies the word ratchet. I initiated a toast and we posed for a group picture. The check came out to $113 including tip. We took another picture with the Lombardi’s sign. The Aussies were tired and decided to go back to their hotel. The rest of us decided to catch Jason’s friends’ show. 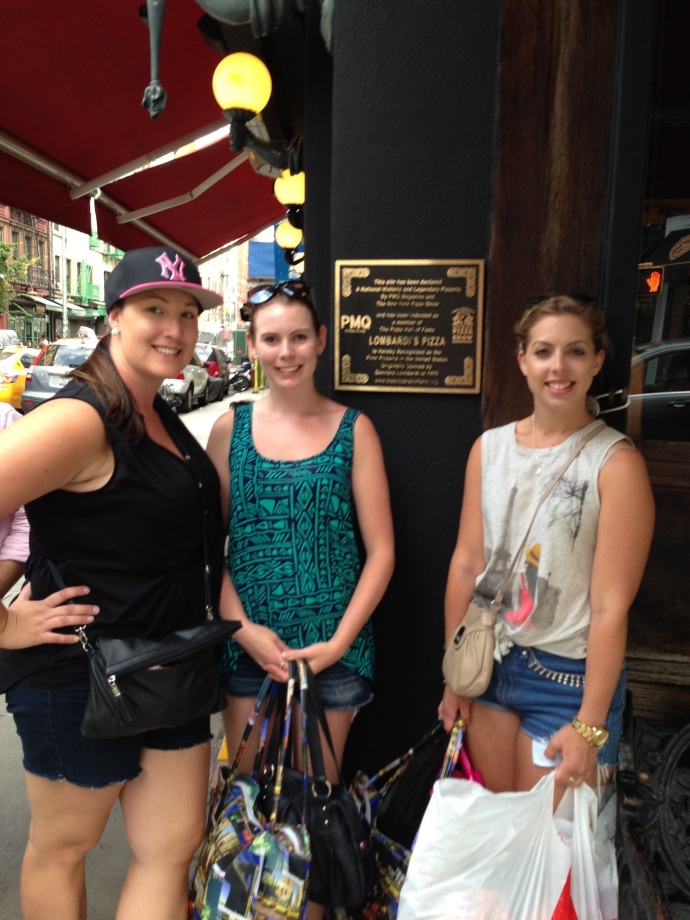 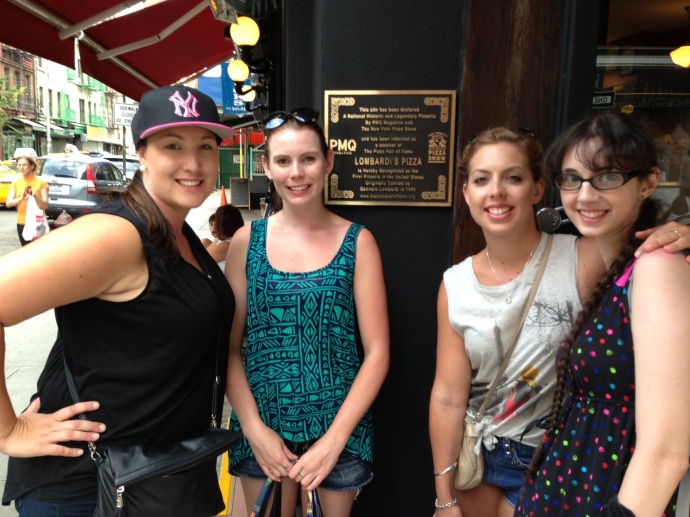 We walked to the Bitter End by NYU. It was a $5 cover and I wasn’t allowed to bring my water in. We found a table in the corner. There was a two drink minimum. I was forced to get a seltzer. We caught the last two songs from the previous band. The place became packed for the band we were there to see. The band was called Schucks Road. They were good and we had fun being our crazy selves. Our tab came at the end of the show and they charged us tip and a service charge. So a $3 seltzer became a lot more expensive. O well. We left and said our goodbyes. 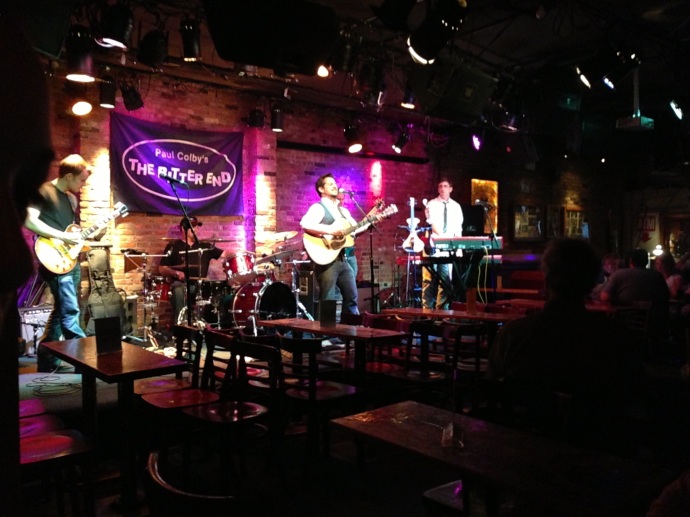 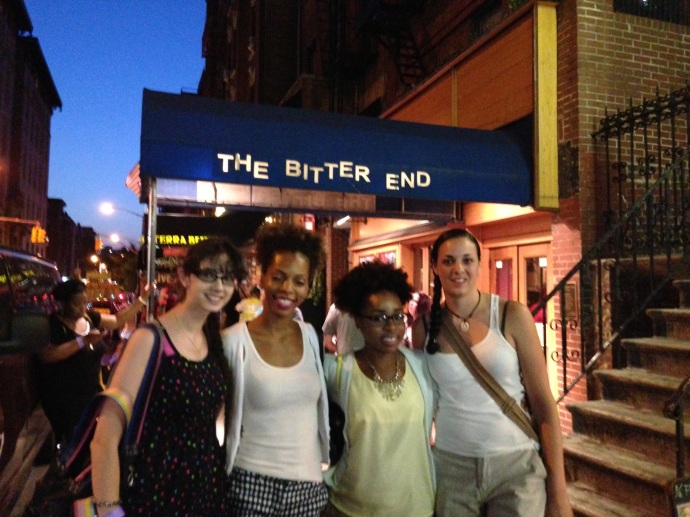 My parents and I usually stay near City Hall so I have been staring at this exquisite building for as long as I can remember. The architecture of the building is incredible. I could look at it all day. I always take a million pictures of it because I just can’t get enough of it. About 2 years ago I was reading one of the Philadelphia guide books that was in the hotel room and I read that the building had a limited number of tours. The tours even included a trip to the top of City Hall which is an observation tower. The tower is right under Ben Franklin’s feet. The problem was that the tour is only given at 12:30pm on weekdays. We are usually in Philly during the weekend or on holidays. Last year when our Dallas trip got pushed back at the last minute due to weather my mom and I had 4 days off with no plans. So we went to Philly and City Hall was on my list.

I booked the tour over the phone the day before. We paid $12 each and picked up our tickets in the gift shop. The gift shop was expensive, but I bought some postcards. We looked around for a bit and were called for our tour. The tour starts in the gift shop. Then it explores the bottom floor and explains all the details of the architecture. Then we are taken upstairs. The staircase is a giant spiral staircase. The rooms inside are incredible. We got to see the City Council Chamber, the Mayor’s Reception Room, Conversation Hall, and the Supreme Court Room. The tower portion only allows 4 people in a small elevator up at a time. The elevator ride was very cool because you got to see the inside of the top of the building. The tower was fantastic! The view was beautiful. We went on a clear day so we could see everything. The tower is definitely not for people that are claustrophobic or afraid of heights. It was strange to look up and see the huge statue of Ben Franklin. My mom and I had a great time! The tour was worth every penny. Glad I got to finally see the inside of this beautifully ornate building.

I love Philly! It is in my top 3 cities in the world (NYC and Vegas are the other two). I’ve been going there since I was a little girl. We go about two or three times a year. Philly has great shops, restaurants, and sites. We have been to so many different restaurants and historical sites yet I still have a list of places I want to go to. Since I have been so many times I’m not going to post a travel journal instead I’m going to post reviews of all places I’ve been to. I’ll also do a top 10 post at some point. Below you will find some photos from over the years (more will appear in the other Philly posts) and a link to my postcards from Philly.

Back in 1995-Independence Hall

2009-Outside the Real World Philadelphia House